Further review on PT totals between Revolver, Ring of Fire and USX

The gist of the conversation was that I would have liked a more even PT distribution between players during the finals (although I understand why it wasn't flat and commend Tallis Boyd on doing a great job with a difficult task).  Jacob asked if that was all that uncommon, so I look at particular games that he suggested.  Here are the graphs, where the y-axis is the number of points played.  For reference, the Revolver-Ring game was a slow bleed where Revolver won 13-10.  The USX final was a closer affair until the very end, when we won 13-11.  Graphs (Revolver, Ring, USX, respectively). 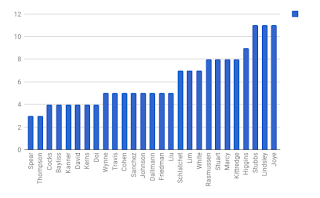 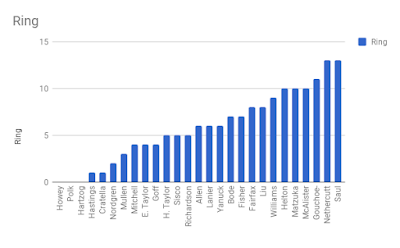 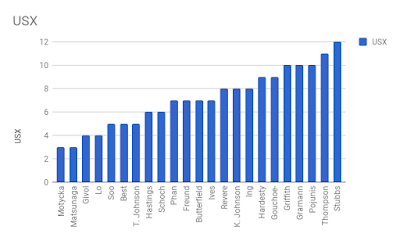 From the looks of it, Jacob is right that the USX point distribution isn't that different from the others. A better question would be if it was different from our semi-final against Canada.  One thing that might be worth paying more attention to is where the ramp starts.  For USX our minimum point were 3 out of 24 (1/8 of the points).  For Revolver the minimum was 3 out of 23 (stupid prime numbers), while the Ring one was 1 out of 23 (ignoring the 0's which might have been injured players).  It would seem that the starting position of the ramp would likely determine how steep it could be.

One other thing that is really worth pointing out, is that a more flat distribution isn't "better."  In this case it was something that we might aspire to, but that doesn't mean we are playing a better form of ultimate or have a higher chance of winning.

That was quick work- thanks for posting! So many factors go into a game, but I think you've been very fair and continue to ask great questions. Hopefully someday we can have stats that are more readily and widely available, but I, too, commend Tallis Boyd for the job he did. Mixed (IMO) is the toughest division in which to play because of the differences between 3 of the players on the field with the other team's 4 as well as various schemes because of that, so that'd be another thing that would be a "neat but maybe someday" thing to consider.

Thanks again for posting!

Hey Man! If you want any typeface for any work then choose from this website;

visit our friends at spin ultimate