Week 1 in the Books

The Padeia Girls began the 2010 season this week. Here was the schedule:

Monday we had 10 girls out. 8 are still in the basketball season (4 JV, who we get back in week 3, and 4 on Varsity, who could be out until mid-march depending on how well the team does in the state tournament. They are highly ranked in AA and could make the finals). We had three that weren't there due to other reasons.

The first practice is always about teaching practice protocol. I like to have them run and stretch (led by captains) and then immediately break in to a drill. The drill should get someone a lot of touches and get them sweating. I usually start with the pendulum drill and then once we have some better skills move to the three-person marking drill. So, before warming up I taught them the drill. It's also important to set the tone of minimizing downtime between drills/talking etc. so that we can make the most of our time.

Once we warmed up we focused on the most important skill in Ultimate: Catching. I maintain that you can excel at Ultimate even without good throws. And in most situations you can't throw until you've caught the disc. We did a few drills to focus on catching with two hands, keeping your eye on the disc, and attacking it. We did some work on going deep as well. While we didn't spend much time on cutting or angles of attack all of the drills were set-up to encourage the right habits in these areas (sharp cuts, cutting off outside food, 45 degree angles). We finished with some 3v3 - which I love early in the season, not just because I don't have a lot of players out yet but because everybody gets a lot of touches and you don't have to touch on strategy at all. 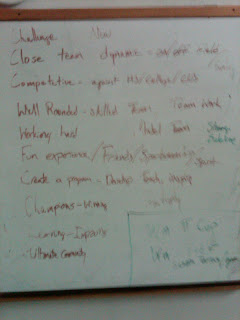 As will happen frequently in February in March we were rained out. So we had a team meeting. I've got 5 or 6 team discussion topics up my sleeve for this type of occurrence. This time we talked about team goals. I started by having each of them say why they were playing Ultimate and I wrote the answers up on the white board. There were a lot of them that ranged from working hard to being challenged to being a part of a team with great dynamics to winning.

From there we tried to identify a tangible "goal" that we could use to symbolize as many of the reasons for playing as possible. We came up with "Win Paideia Cup and win whatever our end of season event is." (We don't currently have an end of year event finalized as we aren't able to compete at Amherst Invite or HS Easterns due to scheduling conflicts). The goal is in this first picture in green on the bottom right. The idea is that we need to achieve many of the "reasons" in order to achieve the goal and the goal will keep us directed.

From there we moved in to a discussion to start laying out "what we would need" in order to achieve our goal. This was a sort of tree structured brainstorming of skills and sub-skills, both team and individual, physical and mental that we would need to win Paideia Cup and win the end of season event. This conversation was a little more dominated by the returning players on the team who had been through this a couple times before and knew what we needed to do. 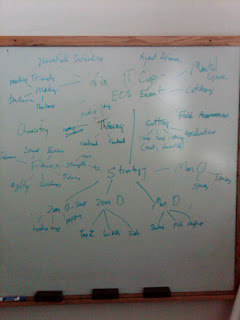 For example, under "Cutting" we have the sub-skills: spacing, timing, reset cutting, downfield cutting, and acceleration. This was only the beginning of this list and I plan to work with the captains on the next rained out practice to work go in to more detail. The point of this exercise is to:
a. To help the team "buy-in" to what we are doing at practice and give them a reason to learn what's being taught and work hard/push through challenges
b. Help guide the captains and I on what we need to cover over the course of the season.

From here I'll be sitting down and breaking down sub-goals and week-by-week schedule of what I'm teaching.

One interesting discussion developed in the middle of the "what we need" discussion. The players suggested that we would need to know the H-stack and/or the vertical stack. I said, let's hold off on that because I was interested in working on a new offense. I didn't want to flesh out man-O strategy beyond "Spacing" and "Timing" at this point. One of my senior captains asked, "what if this new strategy gets in the way of us achieving our goal?" I loved this question. It gets to the heart of why this process is important. It was her telling me that "the team has goals and everything we do should fit in to those goals." I told her that whatever we end up doing with our offense it will have the same fundamental concepts (after all "spacing" and "timing" are parts of Horizontal and Vertical) and we can reevaluate as get further in to it if we need to scrap the new offense. I also said that we've learned a lot of new things over the past two years (horizontal offense, two handler zone o, clam, trap-zone, etc.) and achieved our goals. But it is an important reminder to me that I can't let my desire to try something new trump what the players want out of their season.

We were back out on the fields on Wednesday. We had 10 again and we spent the whole of practice working on throwing. We broke down the backhand and the forehand from grip, through all of the mechanics (wrist, arm, shoulders, torso, hips) and practiced at each level by isolating areas and slowly adding them. We did: throwing while sitting, kneeling, standing but not pivoting, and then pivoting. There was noticeable improvement in almost all of the players throws (including some of the more experienced throwers). We finished with a quick three holes of disc golf.

Rained out again. I was hoping to get to the school to do some individual goal setting but I was slammed at work and at 3:20 when one of my captains called I told her to just let everyone leave. I ended up being at work until 8:30. I'm sure we'll get plenty more rainy days. But I've got to remind them to bring running shoes just in case we get rained out and we want to do a work out instead of talk.

So, week one is in the books. Week two we're going to spend some more time on throwing. Start getting some marking and pivoting and faking in. If we don't get rained out I hope to start focusing on cutting by the end of the week.
Posted by Kyle Weisbrod at 1:38 PM 11 comments:

visit our friends at spin ultimate